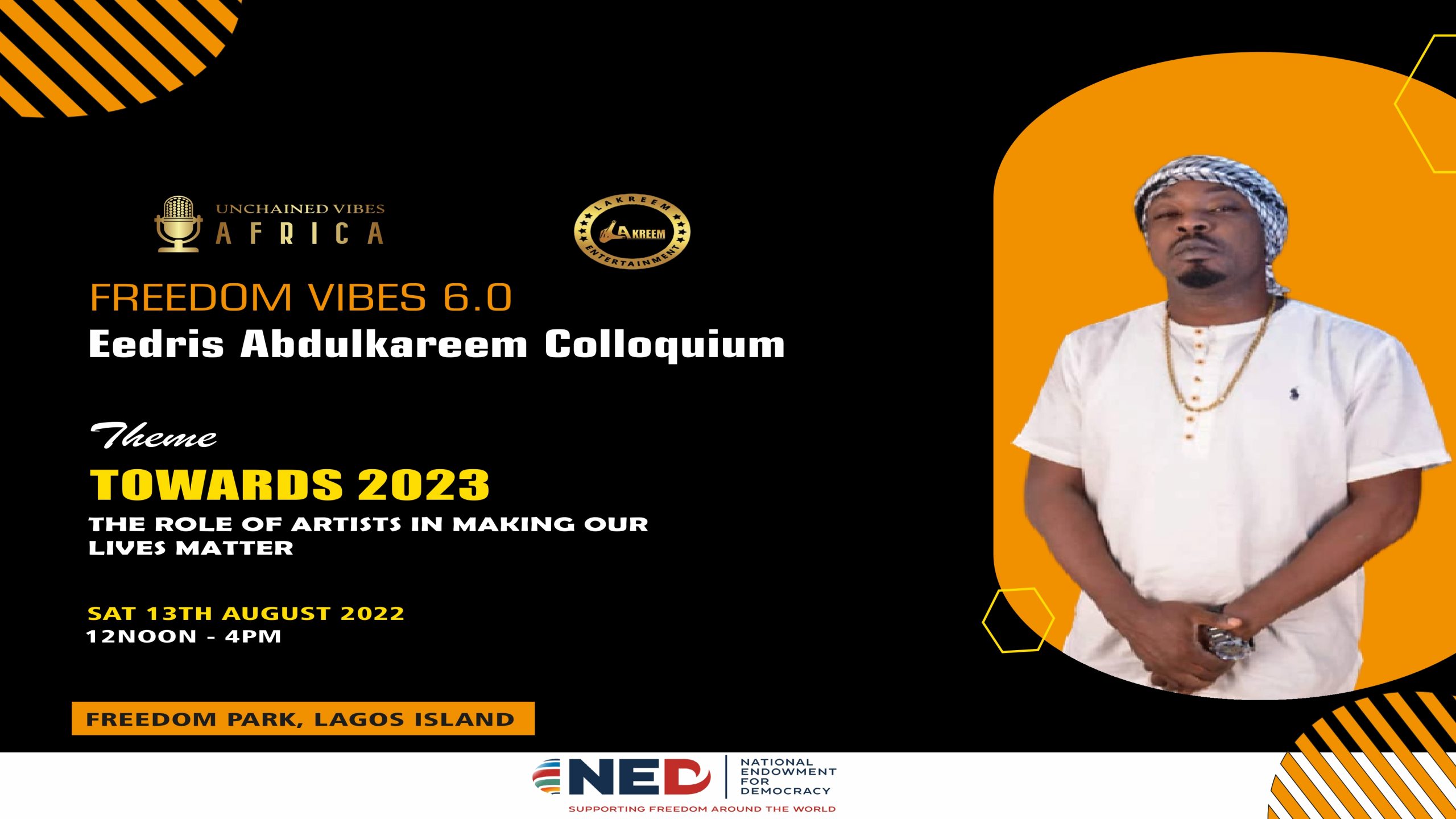 Unchained Vibes Africa and Lakreem Entertainment invite the general public to the Eedris  Abdulkareem Colloquium, a special edition of Freedom Vibes, the sixth in a series of events  geared towards promoting artists’ freedom of expression, and the use of music and artistic  expressions for civic engagements.

The objectives of the Colloquium are: (1) To reflect on the music of Nigeria’s hip hop veteran  Eedris Abdulkareem and his contributions to nation building and (2) To sensitize the general  public on the role of artists in a democracy and mobilize the artistic community to become more  active in civic engagements. The event will provide a platform to draw attention to Eedris’selfless  service to Nigeria through music and his current health challenge. The Colloquium will  complement the efforts of various stakeholders in ramping up support for his recovery. As one  of Nigeria’s most visible and consistent artists advocating for good governance through music,  Eedris has worked with Unchained Vibes Africa and served as an Ambassador of Freedom Vibes since its official launch in October 2021.

Tagged Freedom Vibes 6.0 – Eedris Abdulkareem Colloquium, the event will sensitize the public  on how music can effectively carry critical advocacy messages and raise awareness about social  and political issues in a way that traditional advocacy cannot. Using an audiovisual presentation  dissecting the music of Eedris Abdulkareem, the Colloquium will showcase the common presence  of music in people’s lives and its power to condense feelings and ideas into small units of time  which can easily be accessible to an average person. From health emergencies to insecurity, the  Colloquium will reflect on the Eedris’ years of advocacy demanding respect for human life in  Nigeria.

Over the years, his music has been a major influence on citizens’ yearnings for change and has  triggered responses from authorities. Eedris never keeps quiet in the face of injustice or when  the country is in disarray; he releases songs that speak truth to power.

Eedris was recently diagnosed of kidney failure which has slowed him down in his usual activism through his music. Today, in the face of unprecedented insecurity, health emergencies and  multiple crises that have made life unbearable for ordinary citizens, the usual energies and vibes  from the Hip-hop icon who has been the voice of the voiceless, are missing. This may appear like  a trying period for the Hip-hop icon but in reality, it is a big trouble for the ordinary citizens and  the poor masses whose voices are never heard. Eedris’ music represents these voices that have  been silenced by poverty weaponized by bad governance and corruption.

The colloquium will be graced by music executives and industry key players, including Dr Kenny  Ogunbe (Keke), the CEO of Kennis Music/Kennis 104.1 FM and Dede Mabiaku, Veteran Musician,  Activist and protégé of Afrobeat legend Fela Anikulapo Kuti who are expected to reflect on Eedris  Abdulkareem’s artistic journey and his activism respectively. Taking a critical look at the current  dearth of fearless, patriotic and consistent conscious artists, what this portends for Nigeria’s  future and the urgent need to safeguard that future, the Colloquium will provide a platform for  ramping up support for Eedris Abdulkareem’s recovery from his current health emergency.

Goodwill messages are expected from colleagues, friends, associates and fans of Eedris in Nigeria  and the diaspora. There will be a virtual live session with Eedris who has remained in high spirit  despite the current health challenges.

The colloquium is scheduled for Saturday, 13th August 2022 at Freedom Park, Lagos Island from  11.30am to 4pm. The theme of the Colloquium is Towards 2023: The Role of Artists in Making  Our Lives Matter. Participation is free and open to the general public through prior registration.  It is a hybrid event which allows for a combination of in-person/physical attendance and  virtual/online participation via Zoom webinar.

Time to the Event