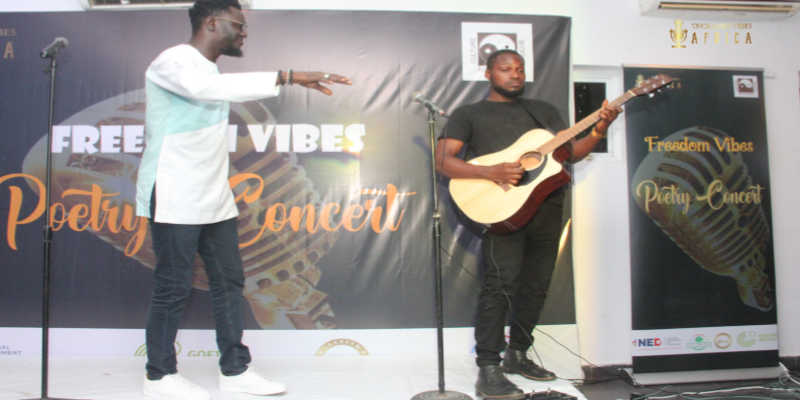 On April 30, 2022, at the end of the Democracy Vibes Summit organized by Unchained Vibes Africa,  a special edition of Freedom Vibes Series was hosted – the Freedom Vibes Poetry Concert. The concert brought together leading Nigerian spoken word poets for a convergence with Afro-pop musicians to promote freedom of expression. It featured the best of performance poets in Nigeria including Dike Chuwumerije, Sage Hassan, RezThaPoet, Iquo Diana-Abasi and the invigorating spirit of the fast rising Victory Ashaka.

The concert featured special appearances by veteran rappers Ruggedman as Guest Artist and Eedris Abdulkareem as Chief Host respectively. A song, Peace and Unity, was performed by Mooh and the Exteem Dancers in honour of the victims of the #EndSARS movement.

Delegates experienced the beauty of spoken word, characterized by oral poetic performance art and performers’ aesthetics of recitation and word play. The poets leveraged their live intonations and voice inflections to engage the audience and convey important messages about freedom of expression and democracy in Nigeria.

One of the highpoints of the concert was the conferment of the Artist of the Month Award on DJ Switch in recognition of her outstanding role in the advocacy for good governance in Nigeria and the sacrifices during the #EndSARS campaign. DJ Switch who participated virtually,  dedicated the award to all the victims and frontliners of the #EndSARS movement.